We are not experts for gear boxes, but we are frequently asked which gear oil we recommend for the T4 Syncro. In the following we would like to share the outcome of our research:

Unfortunately, VW internal specs doesn’t refer to international specifications. But one can assume from gear oil manufacturers, that the internal VW G50 standard is close to the international API GL4 standard. VW G51 is probably similar to the unofficial classification according to API GL4 + or GL4 / GL5.

The manufacturer of the differential, “Steyr-Fahrzeugtechnik” or its service point “S-Tec” writes of 1.3 liters (initial filling) according to the specification “TL52726”, which corresponds to the API-GL4 class.

However, our recommendation for the differential is as follows:

For the highly stressed hypoid teeth, in which the crown and pinion touch only along a small surface area (extreme surface pressure), the GL5 standard is the optimum. For this purpose, the base oil is provided with numerous additives. For this purpose, the base oil is enriched with the additives sulfur & phosphorus. When driving, the surface of the tooth flanks is phosphorized under the influence of pressure and heat. This phosphorization acts like an additional protective film on the particularly stressed surfaces and reduces wear. 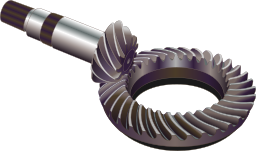 In addition, the additives of the GL5 oils can attack the non-ferrous metal component (Molybdenum coating) of the synchronizer rings.

But there are also oils with the unofficial name GL4 / GL5 (GL4 +), which manage the balancing act between the hypoid gearing’s ideal lubrication and a residual friction for synchronization. This unofficial standard is our recommendation for the manual transmission and should also comply with the VW G51 standard.

Gearbox oils are classified by the American Petroleum Institute (API) using GL ratings. The higher an oil’s GL-rating, the more pressure can be sustained without any metal-to-metal contact taking place between transmission components.