You may wonder why we started to offer a special VC-setup for stronger engines (TDI, Subaru…). What looks like a sophisticated marketing strategy was actually born out of necessity:

We started to rebuilt VCs with original Steyr-Puch setup, and testdrivers used to be happy with it. Also we had superior experiences in tough offroad situations (sand, mud..) with our own AAZ-Syncro.

A German Syncro driver went on a Sahara expedition in Summer 2017 with our VC and was rather unhappy. He sent us videos which showed the rear axle digging in sand, while the front axle was standing still. After 30sec the front axle kicked in, but it was much too late.

So he claimed that our VC isn’t working well, and we thought that maybe something is wrong with our VC. After his expedition he sent us the VC back to Austria and we put it on the teststand. Surprise, surprise the VC was working perfectly – and showed practically the identical test chart as before.

After that we asked the German Syncro driver about his engine, and he told us that he is driving a special TDI-Conversion (AFN mTDI) with around 280 to 290Nm and big 16′ wheels. That’s the point when we looked into our documents and started some calculations…

Originally the torque from the 1,6 TD JX engine goes 60% to the rear and 40% to the front (measured by W.Peschke in his dissertation). All additional torque will just increase the torque on the rear axle – especially when it comes at low RPM. 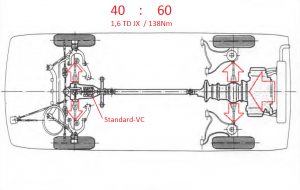 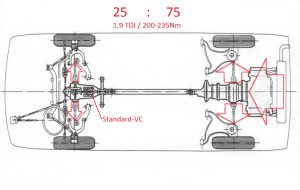 So we did some calculation and made another VC setup for the German Syncro driver with 70% more torque (210Nm@75RPM). Customer is now happy and did some tests in sand. 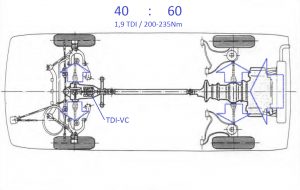 A few months later, Tanja followed Facebook’s call for help from globetrotters “Resfeber”. Their VC showed little effect in the Mongolian sand and the faced several times the risk to get stuck.

The community agreed that their VC is probably “failed open”. We opposed this and assumed that their strong TDI engine causes an inappropriate distribution of driving forces. At the same time we offered our help and sent them a specially adjusted TDI-VC. After we got their old VC to Austria, it turned out that it is even at the upper end of the standard Steyr-Puch tolerance.

We are driving currently the same setup in our own Syncro to get an idea about the increased binding in turns on tarmac. At the original Steyr-Puch VC setup (for JX engine) the minimum torque is around 120 Nm. For a 1Z TDI, we recommend increasing VC’s torque to approx. 180 Nm (+ 50%). We think that’s the upper limitation for driving without a decoupler in urban traffic. But that’s just our personal opinion – someone can see it differently.

But one’s for sure: Since then, we always ask customers about their specific vehicle data (engine / tires / area of application) to give them individual advice about the ideal VC setup.