Meanwhile it’s common, that the splines of the VC housing are a weak point and often worn out. Effects of worn splines are not serious in the first place (except for some tictac noises), but at some point the gearing is totally sheared off and the 4WD becomes a 2WD.

Practically we haven’t seen such an example yet, but we will probably see such damage in the next years.

It was suspected that high-torque TDI engines are responsible for fast wear of splines. Until recently, we only visually examined the splines and “felt” the backlash by hand – not a satisfying situation. That’s why we developed a special measuring tool, which measures the backlash in degree of arc. Now we got reliable data for the first time: 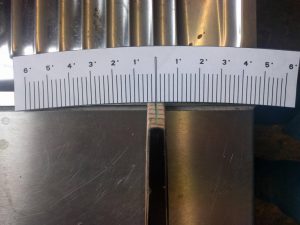 From our tested sample of 67 VC’s have got 7 a backlash greater than 1° – what we see as the upper wear limit. The minimum value is around 0,4° btw.

The 7 worn VCs got not special similarities:

The only similarity that can be seen, is that these 7 Viscos were heavily used. Our guess is that housing splines primarily suffer from tension on asphalt due to extremely hardened VC’s.

To see that over 10% of old VCs have these worn splines, was even to us astonishing. Good VCs are becoming quite rare unfortunately.