I reflected on how to increase the life span of the VC, because the silicon-oil is aging at high temperatures. By using a decoupler this aging can be minimized, but not everyone is willing to refit one.

I was able to document the process of aging by an on- and off-road test over 10.000 km with the following setup

After six month of testing I measured the VC once again on the test rig and got the following result.

You can clearly see the increase in viscosity and hump-temperature. Therefore I recommend a lower hump-temperature – because it’s steadly increasing. The process decelerates over time, but after 100 to 150.000km the VC will look like that: 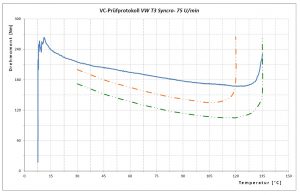 The viscosity of that aged silicon oil in the VC would be like 60.000AK. Such a VC wouldn’t damage the transmission, but parking without power-steering can be quite hard.

WHAT CAN BE DONE?

The process of oxidation can be avoided by replacing the oxgen from the air with Co2. W.Peschke researched this phenomena in his dissertation and provides some evidence about that: 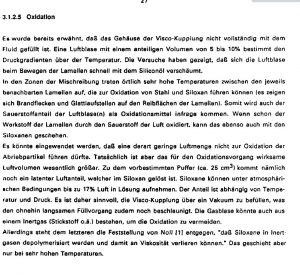 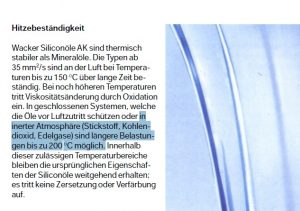 With the help of a vaccum pump I was able to degas the silicon oil and replace the oxgen with Co2. Also interesting is the amout of dissolved air in the silicon-oil. Here you can see a short clip of degassing silicon oil. 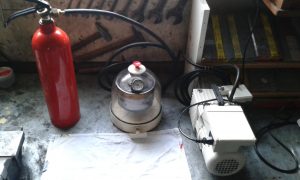 The degassing takes quite a long time (48h) – unfortunately otherwise gas-bubbles will make problems with the filling.

Continous test runs have already shown the non-existing aging of the Co2 Viscous-couplings. But in addition I also made an on- and off-road test over 10.000km. 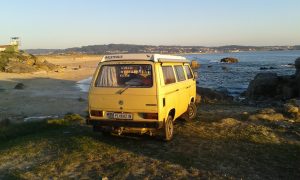 And here you can see the before and after diagram: 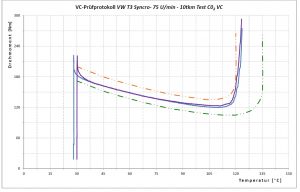 As you can see, there’s practically no aging of the silicon oil. Although unequal worn tires were used for the test-setup. In the future I will  sell the improved Co2- Viscous Couplings only.

A Syncro driver from mountainous Vorarlberg (Austria) subjected our Co2-Visco to a long-term test from 2016 to 2020. Back in summer of 2016 we were contacted after the Syncro driver had to complain about a defective VC (from a competitor) after only 10tkm.

With the intention only to take the role of an appraiser, the Syncro driver had lost faith in the principle of the viscous coupling and was thinking of converting the Syncro with a decoupler. We were able to convince him to try it once again with our improved Co2-VC.

Now that our VC has been tested in Corsica, Liguria, the High Tatras and the Baltic Sea in the last 3.5 years, we have again measured the VC on our test stand.

With the mileage of 18,600 km we could hardly measure any wear!

The Syncro driver also noticed that tire pressures and tread depths were often not perfect. This result confirms the one of 2016, in which the 10tkm were completed within one year.