In order to test the accuracy of the baking oven method for overhauling viscous couplings, I ran an extensive test session on one of these units on the test rig. This posting documents the results of the session and also gives you an insight on the technical backgrounds.

The tested VC comes from T3-Driver who had a serious accident with his Syncro. It was quite easy for him to apply the oven-method because he is working in a lab with all the stuff needed. The VC has been filled with 25K silicon fluid and baked at 110°C (230°F).

This experiment is not about bashing the baking-oven-method, I was rather curious if it’s working or not. In addition I recorded the test-run so that everybody can see what’s going on:

At 135°C (275°F) the test-rig stops automatically for safety reasons. The second test-rund was made with a higher turn-off temperature at 150°C (302°F) – but the VC still showed no tendency to get into the hump. To prevent any damage from the VC I decided not to go any higher with the temperature.

Here you can see the transmission curve: 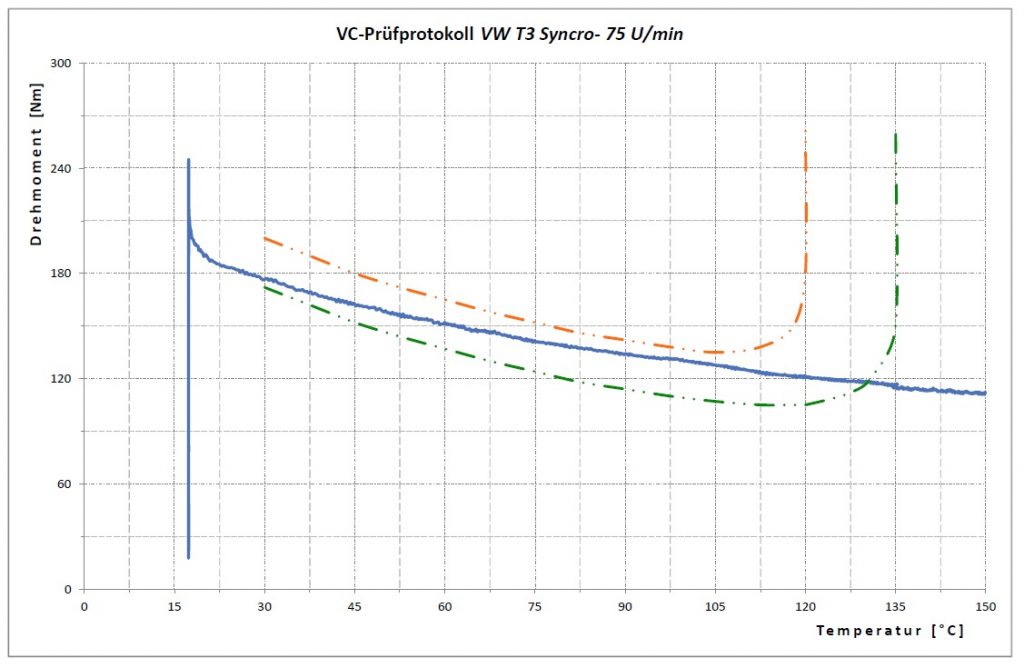 The silicon fluid expands at rising temperature extremely. But the air-bubble get’s not just compressed, it is dissolving in the silicon fluid. And this effect depends on the inner-pressure in the VC.

In fact the rising temperature alone would be counterproductive for the VC to get into the Hump. Because the higher the temperature the less air can be dissolved in a fluid. Everybody knows this in practice from mineral water, which is sparkling more when it gets warmer.

To make it even more complicated: There is more dissolved air in a VC then the air in the bubble. Another experiment shows with the help of a vaccum-pump how much air is dissolved in the high viscous silicon fluid:

The baking-oven temperature is not regarding to the hump-temperature of a VC. In the VC tested was way to less silicon fluid, why it lacks the self protection for overheating (hump)